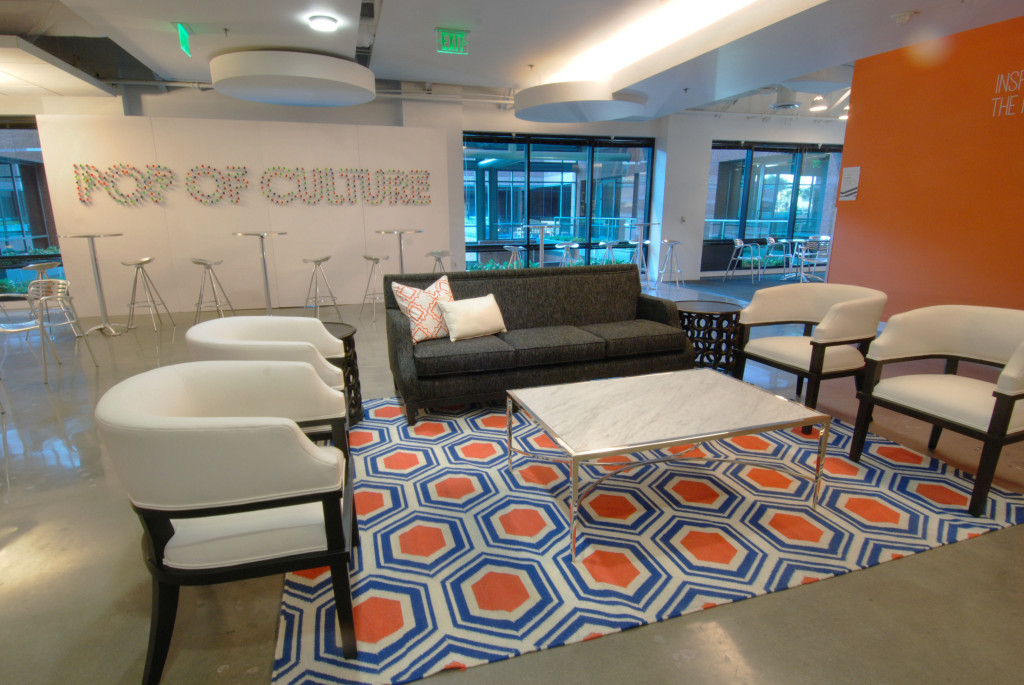 Black and White with a POP of Culture

E! Entertainment’s headquarter offices had, for a long time, enjoyed the well-thought-out and whimsical style brought to reality by HOK’s Pam Light. When they moved into their current space, occupying over 200,000 ft.², the multicolored and whimsical brand from the 90’s sophisticatedly executed and a decade later, maintained their look with a fairly timeless sophistication. So when it came time to re think the environment to exude their newly created on-air marketing image “Black and white with a pop of culture” was a carefully planned, boldly executed, complete flavor change without affecting the bones of this award winning interior.

Extensive work had gone into the development of the on-air brand, followed by deliberations on the best way to communicate a two dimensional print and online vision into a three dimensional workspace. Collaborative effort went into every elevation and graphic design with specific intent behind each shade. 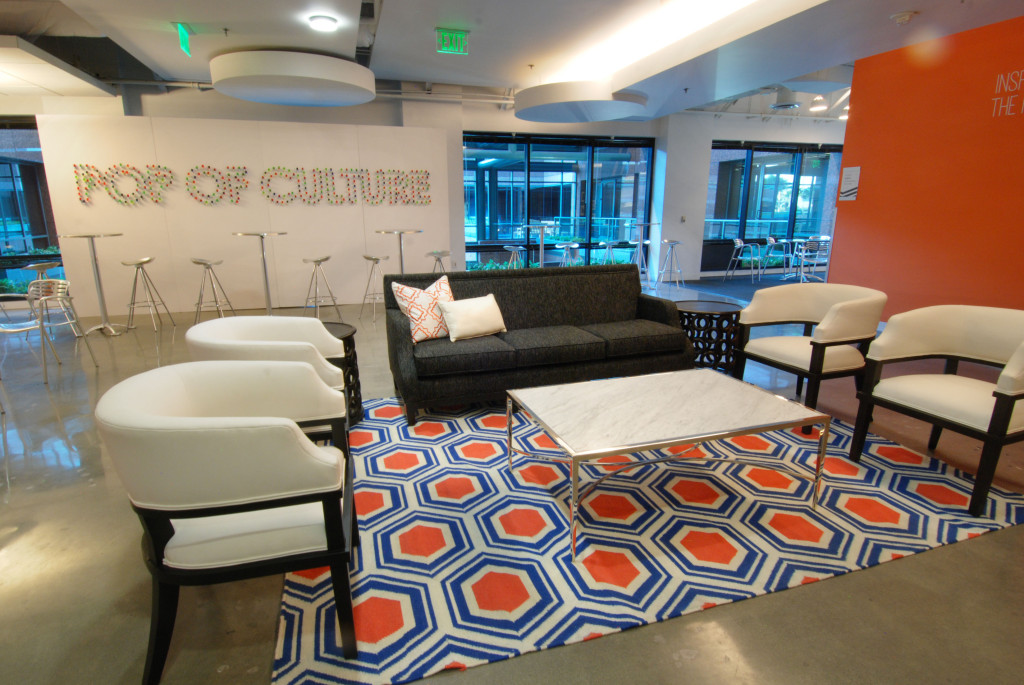 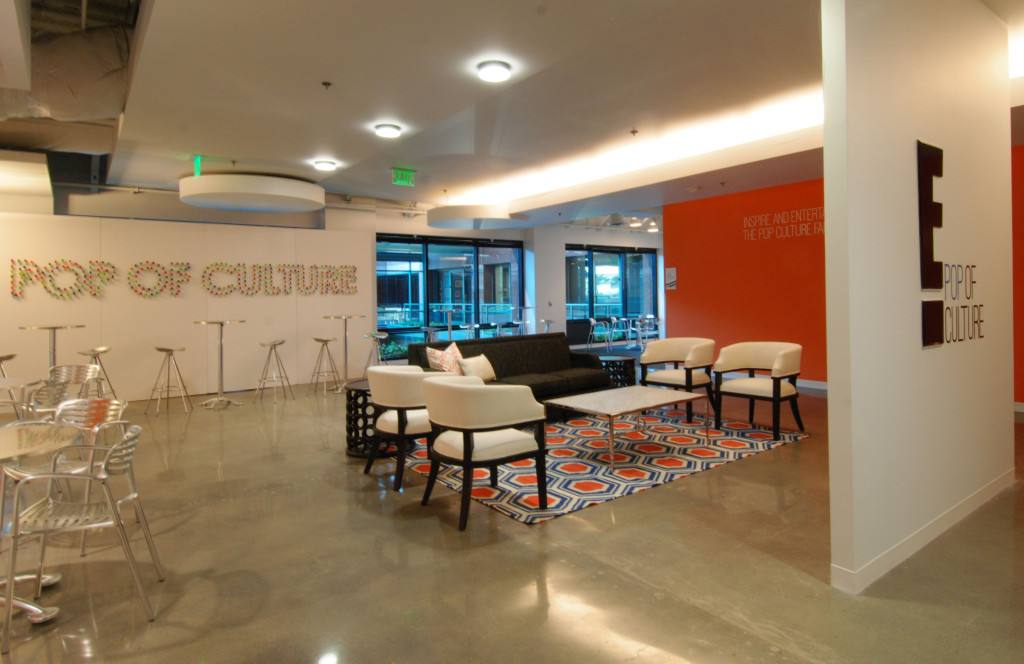 In tandem with the re-brand and redesign of the E! headquarters spaces, was an effort to include the new trend of open, collaborative workspaces. Since the occupants were now bursting at the seams, the last decade had brought a “tightening” of corridor areas and conversion of coffee rooms into offices and edit bays.  In addition to the growing demands on conference room space, many rooms had developed into multipurpose shoot spaces. The result was making it more and more difficult for teams to schedule spaces for their, at times last minute, creative planing needs.  This unsatisfied requirement in concern with the desire to have granted areas of interest for functional reasons as well as to revisit the fun and playful yet productive way of working this company has always enjoyed. 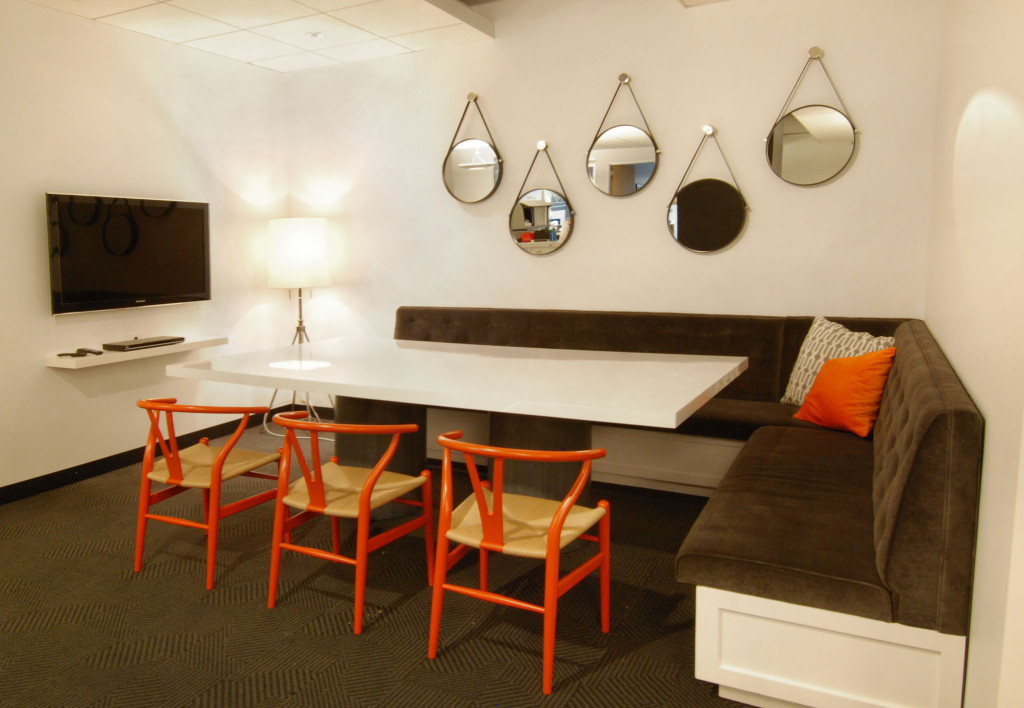 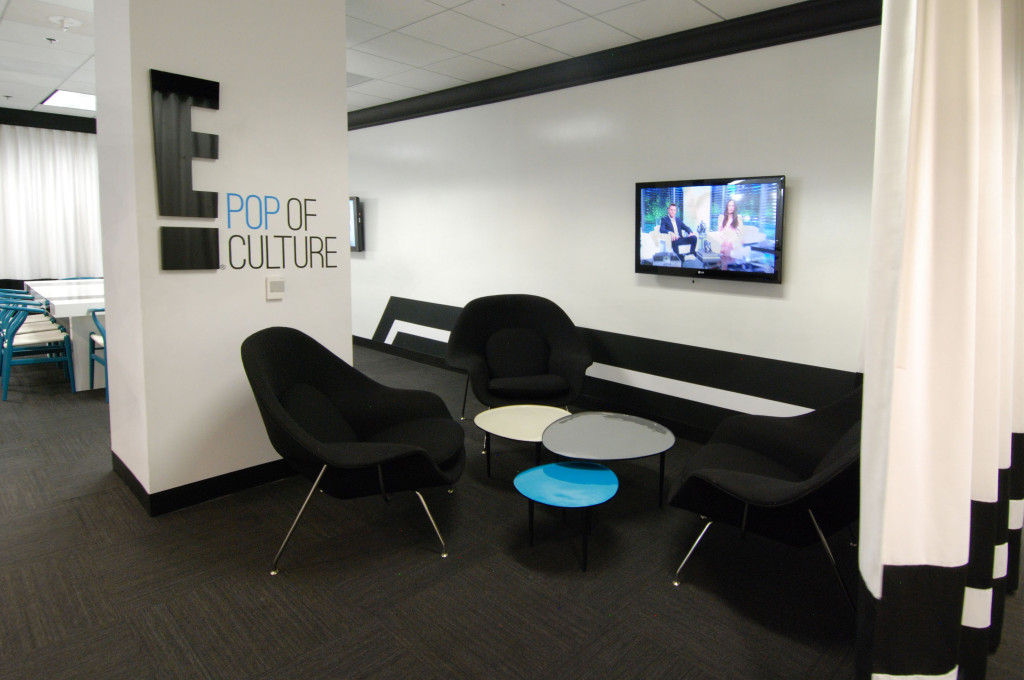 For this particular client,  one of the many reasons for the success of the collaborative workspace was the joining of production and corporate activities. For example, even if you worked in finance, you knew that you were part of an entertainment company, because the interiors did not silo departments in two separate suites.

This came as a huge advantage when the corporate culture turned to embrace the open, collaborative trend. 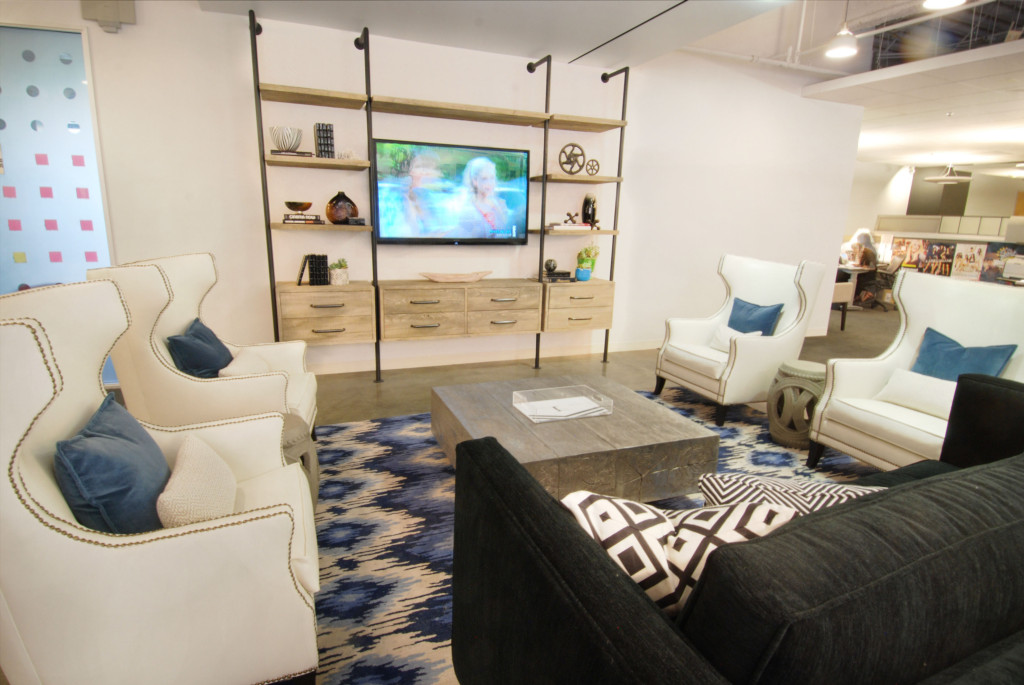 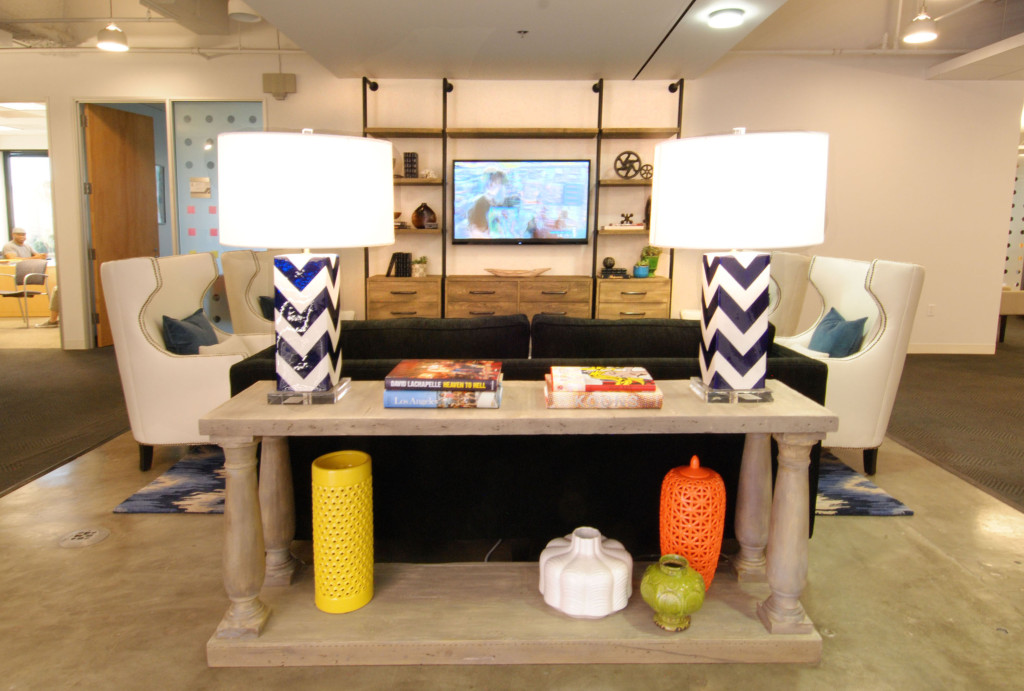 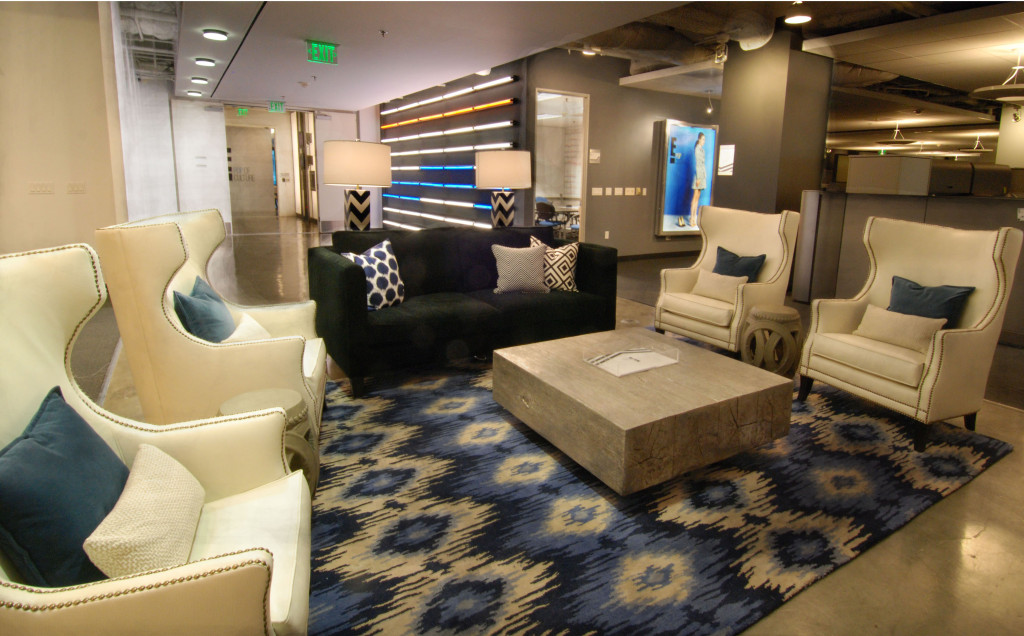 The below illustrated collaborative space was previously a dark and dead end bank of workstations.  A wall was constructed to partially close off the area and furnishings reflecting the E! Brand were included for a comfortable and productive team space.  At times, the production arm of the network will use this area for quick camera shoots.  Since the furniture was selected with the coordination of the Production Design team, the colors and textures work on-camera.  However at times the production needs require different furnishings at which times some of the items  shown here are temporarily set aside to allow a change in the set.

The Marketing team for E! Entertainment had participated closely with the design direction of these spaces, offering the visual direction of branding to unify the total company brand across the online, print, and physical implementation of the “Pop of Culture”.  A specific example is in the Emerald sofa selected below at a time when this color had been awarded the Pantone Color of the Year. 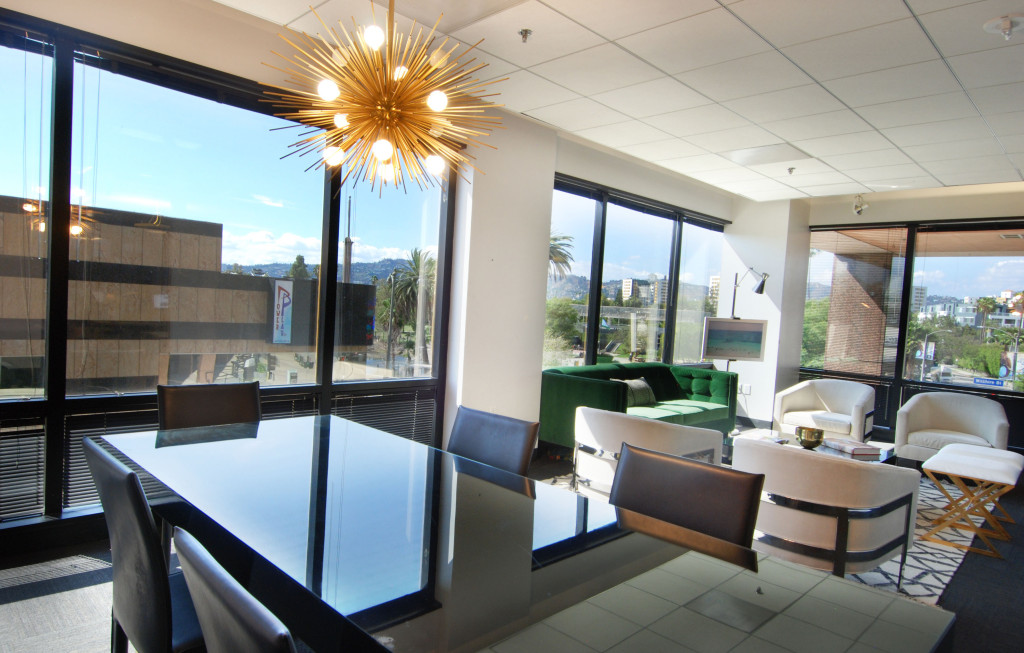 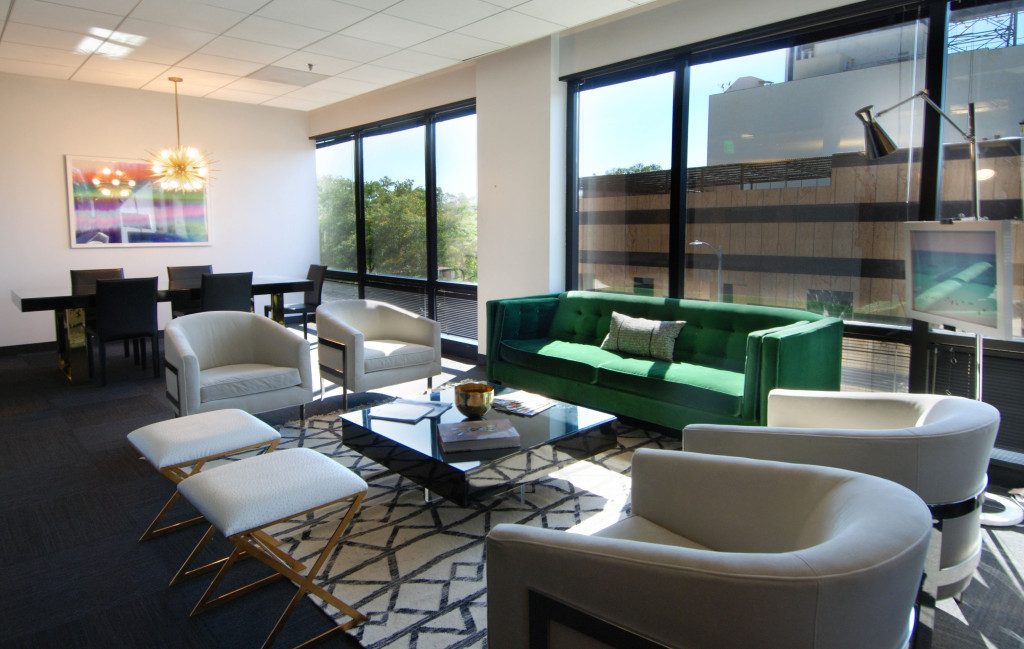